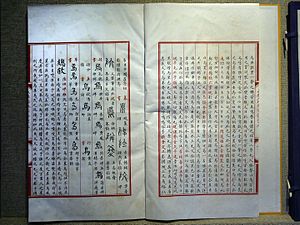 Pages of the Yongle Canon at the Changling tombs

The Yongle Encyclopedia or Yongle Dadian (Template:Zh) is a partially lost Chinese leishu encyclopedia commissioned by the Yongle Emperor of the Ming dynasty in 1403 and completed by 1408. Its sheer scope and size made it the world's largest general encyclopedia until it was surpassed by Wikipedia on September 9, 2007, nearly six centuries later.[1][2][3]

Although known for his military achievements, the Yongle Emperor was also an intellectual who enjoyed reading.[4] His love for research led him to develop the idea of categorizing literary works into a reference encyclopedia, in order to preserve rare books and simplify research.[5][6] Instrumental to this undertaking was Emperor Yongle’s own transformation of the Hanlin Academy.[5] Prior to his reign, the Hanlin Academy was responsible for various clerical tasks, such as drafting proclamations and edicts.[5] Emperor Yongle decided to elevate the status of the Hanlin Academy, and began selecting only the highest-ranking recruits for the academy.[4] Clerical duties were relegated to the Imperial officers, while the Hanlin Academy, now full of elite scholars, began working on literary projects for the Emperor.[4]

In 1404, a year after the work was commissioned, a team of 100 scholars, mostly from the Hanlin Academy, completed a manuscript called A Complete Work of Literature.[5] Emperor Yongle rejected this work and insisted on adding other volumes.[5] In 1405, under Emperor Yongle’s command, the number of scholars rose to 2,169. Scholars were sent all over China to find books and expand the encyclopedia.[5] In addition, Emperor Yongle assigned his personal advisor, Dao Yan, a monk, and Liu Jichi, the deputy minister of punishment, as co-editors of the encyclopedia, supporting Yao Guangxiao.[7] The scholars spent four years compiling the leishu encyclopedia, under the leadership of general editor Yao Guangxiao.[8]

The encyclopedia was completed in 1408[10] at the Guozijian in Nanjing (now Nanjing University). It comprised 22,937 manuscript rolls[10] or chapters, in 11,095 volumes, occupying roughly 40 cubic meters (1400 ft3), and using 370 million Chinese characters[9][11] — the equivalent of about a quarter of a billion English words (around six times as many as the Encyclopædia Britannica). It was designed to include all that had been written on the Confucian canon, as well as all history, philosophy, arts and sciences. It was a massive collation of excerpts and works from the entirety of Chinese literature and knowledge. Emperor Yongle was so pleased with the finished encyclopedia, that he named it after his reign, and personally wrote a lengthy preface highlighting the importance of preserving the works.[6]

The Yongle Encyclopedia, in 2014, on display at The National Library of China.

The encyclopedia’s physical appearance differed from any other Chinese encyclopedias of the time.[12] It was bigger in size, used special paper, and was bound in a “wrapped back” or (包背裝 bao bei zhuang) style.[13] The use of red ink for titles and authors, an ink exclusively reserved for the emperor, helped to confirm that the volumes were of royal production.[12] Each volume was protected by a hard-cover which was wrapped in yellow silk.[13] The encyclopedia was not arranged by subject, like other encyclopedias, instead it was arranged by 洪武正韻 (Hongwu zhengyun) a system in which characters are ordered phonetically/rhythmically.[13] The use of this system helped the reader find specific entries with ease.[13] Although book printing already existed in the Ming Dynasty, the Yongle Encyclopedia was exclusively handwritten.[13] Each handwritten entry was a collection of existing literature, some of which derived from rare and delicate texts.[13] The importance of the Yongle Encyclopedia was the preservation of such texts, and the vast number of subjects it covered.[13]

At the end of the Ming dynasty, scholars began to question Emperor Yongle's motives for not commissioning more copies of the encyclopedia, instead of keeping them in storage.[6] Some scholars, like Sun Chengze, a Qin scholar, theorized that Emperor Yongle used the literary project for political reasons.[6] At the time, Neo-Confucians were refusing to take civil service exams, or participate in any imperial duties, due to Emperor Yongle's violent usurpation of the throne.[6] Emperor Yongle's literary undertaking did attract the attention of these scholars, who eventually joined the project.[6] Because Emperor Yongle did not want a strictly Confucian point of view for the encyclopedia, Non-Confucian scholars were also included, and contributed to the Buddhism, Daoism, and Divination sections of the encyclopedia.[6] The inclusion of these subjects intensified the scrutiny against Emperor Yongle amongst Neo-Confucians who believed the encyclopedia was nothing but "wheat and chaff".[6] However, despite the varied opinions, the encyclopedia is widely regarded as a priceless contribution in preserving a wide range of China's historic works, many of which would be lost otherwise.

The Yongle Dadian was not printed for the general public, because the treasury had run out of funds when it was completed in 1408Template:Citation needed. It was placed in Wenyuan Ge (文渊阁) in Nanjing until 1421, when the Yongle Empire moved the capital to Beijing and placed the Yongle Dadian in the Forbidden City.[14] In 1557, during the reign of the Jiajing Emperor, the encyclopedia was narrowly saved from a fire that burnt down three palaces in the Forbidden City. A manuscript copy was commissioned by Jiajing Emperor in 1562 and completed in 1567.[8] The original copy was lost afterwards. There are three major hypotheses for its disappearance, but no conclusion was made:

The original manuscript of the Yongle Dadian was almost completely lost by the end of the Ming dynasty,[8] but 90 percent of the 1567 manuscript survived until the Second Opium War in the Qing dynasty. In 1860, the Anglo-French invasion of Beijing resulted in extensive burning and looting of the city,[16] with the British and French soldiers taking large portions of the manuscript as souvenirs.[8] 5,000 volumes remained by 1875, less than half of the original, which dwindled to 800 by 1894. During the Boxer Rebellion and the 1900 Eight-Nation Alliance occupation of Beijing, allied soldiers took hundreds of volumes, and many were destroyed in the Hanlin Academy fire. Only 60 volumes remained in Beijing.[8]