Template:Use mdy dates Template:Infobox baseball biography Willie Lee McCovey (January 10, 1938 – October 31, 2018) was an American Major League Baseball first baseman. Known as "Stretch" during his playing days, and later also nicknamed "Mac" and "Willie Mac," he is best known for his long tenure as one of the sport's greatest stars with the San Francisco Giants.

Over a 22-year career between 1959 and 1980 he played 19 seasons with the Giants and three more for the San Diego Padres and Oakland Athletics. A fearsome left-handed hitter, he was a six-time All-Star, three-time home run champion, MVP, and was inducted into the Baseball Hall of Fame in 1986 in his first year of eligibility, only the 16th man so honored.

McCovey was known as a dead-pull[1] line drive hitter, causing some teams to employ a shift against him.[2] Seventh on baseball's all-time home run list when he retired, McCovey was called "the scariest hitter in baseball" by pitcher Bob Gibson, seconded by similarly feared slugger Reggie Jackson.[3] McCovey hit 521 home runs, 231 of them in Candlestick Park, the most in that park by any player. A home run he hit on September 16, 1966, was described as the longest ever hit in that stadium.[4]

McCovey was born in Mobile, Alabama, the seventh child of ten born to Frank McCovey, a railroad worker, and Esther.[5] He began working part time at the age of 12 and dropped out of high school in order to work full time.[6]

Despite being passed on by scout Ed Scott, who signed Hank Aaron for the Negro American League Indianapolis Clowns, McCovey was invited to a New York Giants tryout camp in Melbourne, Florida while he was living and working in Los Angeles. The invitation came from Giants scout and former Negro League owner Alex Pompez.[6]

In 1955 McCovey made his professional debut. The Sandersville Giants of the Georgia State League in Sandersville, Georgia had McCovey on their roster, with McCovey having signed a contract for $175.00 per month. McCovey was 17 years old, 6'2", 165 pounds, and proceeded to hit .305 with 19 home runs, scoring 113 runs in 107 games.[7]

On his way to the Major Leagues, McCovey played for a San Francisco Giants' farm club in Dallas, Texas that was part of the Class AA Southern League. He did not participate when his team played in Shreveport, Louisiana due to segregation in that city. He later played for the Pacific Coast League Phoenix Giants just prior to being called up by the San Francisco Giants.[8]

In his Major League debut on July 30, 1959, McCovey went four-for-four against Hall-of-Famer Robin Roberts of the Philadelphia Phillies with two singles and two triples. In 52 major league games, he had a .354 batting average and 13 home runs. He was named the National League's (NL) Rookie of the Year.[5] He won the NL Player of the Month Award in August, his first full month in the majors (.373, 8 HR, 22 RBI). He had a 22-game hitting streak, setting the mark for San Francisco Giants rookies, four short of the all-time team record.[9]

Three years later, McCovey helped the Giants to the 1962 World Series against the New York Yankees,[10] the only World Series appearance of his career.[11] In the bottom of the ninth inning of Game 7, with two outs and the Giants trailing 1–0, Willie Mays was on second base and Matty Alou was on third base. Any base hit would likely have won the championship for the Giants. McCovey hit a hard line drive that was snared by the Yankees' second baseman Bobby Richardson, ending the series with a Yankees' win.[10]

The moment was immortalized in two Peanuts comic strips by Charles M. Schulz.[5][12] The first ran on December 22, 1962, with Charlie Brown sitting silently alongside Linus for three panels before suddenly lamenting, "Why couldn't McCovey have hit the ball just three feet higher?" The second, from January 28, 1963, featured Charlie Brown breaking an identical extended silence by crying, "Or why couldn't McCovey have hit the ball even two feet higher?"[13] 26 years later, on the occasion of his Hall of Fame election, McCovey was asked how he would like his career to be remembered. “As the guy who hit the ball over Bobby Richardson’s head in the seventh game,” replied McCovey.[14]

In the early years of Candlestick Park, the Giants home stadium, the area behind right field was open except for three small bleacher sections. When McCovey came to bat, typically those bleachers would empty as the fans positioned themselves on the flat ground, hoping to catch a McCovey home run ball.[15]

In 1976, McCovey struggled, and lost the starting first base job to Mike Ivie. He batted .203 with seven home runs in 71 games. Near the end of the season, the Oakland Athletics purchased his contract from the Padres. He played in eleven games for them.[6][16]

McCovey returned to the Giants in 1977 without a guaranteed contract, but he earned a position on the team.[6] With Hank Aaron and Frank Robinson having retired at the end of the 1976 season with 755 and 586 home runs respectively, McCovey began 1977 as the active home run leader with 465. That year, during a June 27 game against the Cincinnati Reds, he became the first player to hit two home runs in one inning twice in his career (the first was on April 12, 1973), a feat since accomplished by Andre Dawson, Dale Murphy, Jeff King, Alex Rodriguez, and Edwin Encarnacion. One was a grand slam and he became the first National Leaguer to hit seventeen. At age 39, he had 28 home runs and 86 RBIs and was named the Comeback Player of the Year.[17]

On June 30, 1978, at Atlanta's Fulton County Stadium, McCovey hit his 500th home run, and two years later, on May 3, 1980, at Montreal's Olympic Stadium, McCovey hit his 521st and last home run, off Scott Sanderson of the Montreal Expos. This home run gave McCovey the distinction, along with Ted Williams (with whom he was tied in home runs), Rickey Henderson, and Omar Vizquel of homering in four different decades: the 1950s, '60s, '70s, and '80s. McCovey is one of only 29 players in baseball history to date to have appeared in Major League baseball games in four decades.[18]

McCovey was a senior advisor with the Giants for 18 years. In this role, he visited the team during spring training and during the season, providing advice and other services.[21]

In September 2003, McCovey and a business partner opened McCovey's Restaurant, a baseball-themed sports bar and restaurant located in Walnut Creek, California. The restaurant closed in February 2015.[22] 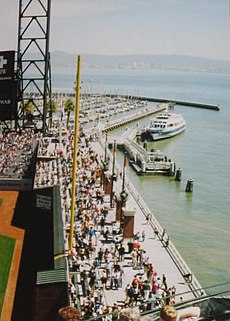 McCovey Cove and the arcade at Oracle Park

McCovey is best remembered for the ferocity of his line drive batting style. In his book Ball Four, pitcher Jim Bouton wrote about watching the slugger blast the ball in batting practice, while making "little whimpering animal sounds" in response to each of McCovey's raw power drives. Reds manager Sparky Anderson also had a healthy respect for the damage McCovey could do, saying "I walked Willie McCovey so many times, he could have walked to the moon on all those walks." McCovey's bat was so lethal in his prime he was intentionally walked an all-time record 45 times in 1969, shattering the previous record by a dozen. This remained the major league mark for 33 years until broken by fellow Giant Barry Bonds. The following year McCovey was intentionally walked 40 times. Once, speaking to the pitcher before a McCovey at-bat, Mets inimitable manager Casey Stengel joked, "Where do you want to pitch him, upper deck or lower deck?"

In 1999, McCovey was ranked 56th on the Sporting News list of the 100 Greatest Baseball Players,[24] and was nominated as a finalist for the Major League Baseball All-Century Team. Two years later, the sport's most prominent sabermetric analyst, Bill James, ranked him 69th, and the 9th-best first baseman.[25] Since 1980, the Giants have awarded the Willie Mac Award to honor his spirit and leadership.

The inlet of San Francisco Bay beyond the right field fence of Oracle Park, historically known as China Basin, has been re-dubbed McCovey Cove in his honor. A statue of McCovey was erected across McCovey Cove from the park, and the land on which it stands named McCovey Point. On September 21, 1980, the Giants retired his uniform number 44, which he wore in honor of Hank Aaron, a fellow Mobile, Alabama native.[26][27]

McCovey's first marriage was to Karen McCovey, which produced a daughter. On August 1, 2018, he married longtime girlfriend Estela Bejar at AT&T Park.[32]

In 1996, McCovey and fellow baseball Hall of Famer Duke Snider pled guilty to federal tax fraud charges that they had failed to report about $10,000 in income from sports card shows and memorabilia sales from 1988 to 1990. McCovey was given two years of probation and fined $5,000.[33][34] He received a pardon from President Barack Obama on January 17, 2017.[35]

In his later years, McCovey dealt with several health issues, including atrial fibrillation and an infection in 2015 that nearly killed him. After his career ended he endured several knee surgeries, which left him in a wheelchair, and he was hospitalized several times.[36]

McCovey died at the age of 80 at Stanford University Medical Center on October 31, 2018 after battling "ongoing health issues". He had been hospitalized for an infection late the previous week.[11] His longtime friend and fellow Hall-of-Famer Joe Morgan was at his bedside.[20] A public memorial service for McCovey was held at AT&T Park on November 8, 2018.