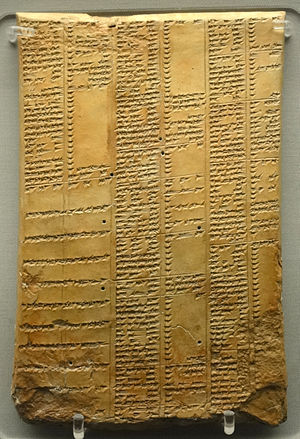 Synonym list in cuneiform on a clay tablet, Neo-Assyrian period[1]

A synonym is a word or phrase that means exactly or nearly the same as another word or phrase in the same language. Words that are synonyms are said to be synonymous, and the state of being a synonym is called synonymy. For example, the words begin, start, commence, and initiate are all synonyms of one another. Words are typically synonymous in one particular sense: for example, long and extended in the context long time or extended time are synonymous, but long cannot be used in the phrase extended family. Synonyms with exactly the same meaning share a seme or denotational sememe, whereas those with inexactly similar meanings share a broader denotational or connotational sememe and thus overlap within a semantic field. The former are sometimes called cognitive synonyms and the latter, near-synonyms,[2] plesionyms[3] or poecilonyms.[4]

Some lexicographers claim that no synonyms have exactly the same meaning (in all contexts or social levels of language) because etymology, orthography, phonic qualities, connotations, ambiguous meanings, usage, and so on make them unique. Different words that are similar in meaning usually differ for a reason: feline is more formal than cat; long and extended are only synonyms in one usage and not in others (for example, a long arm is not the same as an extended arm). Synonyms are also a source of euphemisms.

Metonymy can sometimes be a form of synonymy: the White House is used as a synonym of the administration in referring to the U.S. executive branch under a specific president.[5] Thus a metonym is a type of synonym, and the word metonym is a hyponym of the word synonym.Template:Citation needed

The analysis of synonymy, polysemy, hyponymy, and hypernymy is inherent to taxonomy and ontology in the information-science senses of those terms.[6] It has applications in pedagogy and machine learning, because they rely on word-sense disambiguation.[7]

Synonyms are defined with respect to certain senses of words: pupil as the aperture in the iris of the eye is not synonymous with student. Such like, he expired means the same as he died, yet my passport has expired cannot be replaced by my passport has died.

In English, many synonyms emerged in the Middle Ages, after the Norman conquest of England. While England's new ruling class spoke Norman French, the lower classes continued to speak Old English (Anglo-Saxon). As Old English became more developed, more words would be borrowed from a variety of languages, resulting in more synonyms.[8] Thus, today we have synonyms like the Norman-derived people, liberty and archer, and the Saxon-derived folk, freedom and bowman. For more examples, see the list of Germanic and Latinate equivalents in English.

A thesaurus lists similar or related words; these are often, but not always, synonyms.