Isidore of Seville (Template:IPAc-en; Template:Lang-la; Cartagena, c. 560 –  Seville, 4 April 636), was a scholar and, for over three decades, Archbishop of Seville. He is widely regarded, in the oft-quoted words of the 19th-century historian Montalembert, as "the last scholar of the ancient world."<ref>Montalembert, Charles F. Les Moines d'Occident depuis Saint Benoît jusqu'à Saint Bernard [The Monks of the West from Saint Benoit to Saint Bernard]. Paris: J. Lecoffre, 1860.</ref>

At a time of disintegration of classical culture,<ref>Jacques Fontaine, Isidore de Séville et la culture classique dans l'Espagne wisigothique (Paris) 1959</ref> and aristocratic violence and illiteracy, he was involved in the conversion of the Arian Visigothic kings to Catholicism, both assisting his brother Leander of Seville, and continuing after his brother's death. He was influential in the inner circle of Sisebut, Visigothic king of Hispania. Like Leander, he played a prominent role in the Councils of Toledo and Seville. The Visigothic legislation that resulted from these councils influenced the beginnings of representative government.Template:Fact

His fame after his death was based on his Etymologiae, an etymological encyclopedia which assembled extracts of many books from classical antiquity that would have otherwise been lost.

Isidore was born in Cartagena, Spain, a former Carthaginian colony, to Severianus and Theodora. Both Severianus and Theodora belonged to notable Hispano-Roman families of high social rank.<ref>Priscilla Throop, Isidore of Seville's Etymologies: Complete English Translation. Vermont: MedievalMS, 2005, p. xi.</ref> His parents were members of an influential family who were instrumental in the political-religious maneuvering that converted the Visigothic kings from Arianism to Catholicism. The Catholic Church celebrates him and all his siblings as known saints:

Isidore received his elementary education in the Cathedral school of Seville. In this institution, the first of its kind in Iberia, a body of learned men including Archbishop Leander of Seville taught the trivium and quadrivium, the classic liberal arts. Isidore applied himself to study diligently enough that he quickly mastered Latin,<ref>"His literary style, though lucid, is pedestrian": Katherine Nell MacFarlane's observation, in "Isidore of Seville on the Pagan Gods (Origines VIII. 11)", Transactions of the American Philosophical Society, New Series, 70.3 (1980):1–40, p. 4, reflects mainstream secular opinion.</ref> and acquired some Greek, and Hebrew.

Two centuries of Gothic control of Iberia incrementally suppressed the ancient institutions, classic learning, and manners of the Roman Empire. The associated culture entered a period of long-term decline. The ruling Visigoths nevertheless showed some respect for the outward trappings of Roman culture. Arianism meanwhile took deep root among the Visigoths as the form of Christianity that they received.

Scholars may debate whether Isidore ever personally embraced monastic life or affiliated with any religious order, but he undoubtedly esteemed the monks highly.

A statue of Isidore of Seville by José Alcoverro, 1892, outside the Biblioteca Nacional de España, in Madrid

After the death of Leander of Seville on 13 March 600 or 601, Isidore succeeded to the See of Seville. On his elevation to the episcopate, he immediately constituted himself as the protector of monks.

Isidore recognized that the spiritual and material welfare of the people of his See depended on the assimilation of remnant Roman and ruling barbarian cultures, and consequently attempted to weld the peoples and subcultures of the Visigothic kingdom into a united nation. He used all available religious resources toward this end and succeeded. Isidore practically eradicated the heresy of Arianism and completely stifled the new heresy of Acephali at its very outset. Archbishop Isidore strengthened religious discipline throughout his See.

In 619, Isidore of Seville pronounced anathema against any ecclesiastic who in any way should molest the monasteries.

Isidore presided over the Second Council of Seville, begun on 13 November 619, in the reign of King Sisebut, a provincial council attended by eight other bishops, all from the ecclesiastical province of Baetica in southern Spain. The Acts of the Council fully set forth the nature of Christ, countering the conceptions of Gregory, a Syrian representing the heretical Acephali.

Based on a few surviving canons found in the Pseudo-Isidorian Decretals, Isidore is known to have presided over an additional provincial council around 624.

The council dealt with a conflict over the See of Écija, and wrongfully stripped bishop Martianus of his see, a situation that was rectified by the Fourth Council of Toledo. It also addressed a concern over Jews who had been forced to convert to Christianity by Sisebut failing to present their children for baptism.

The records of the council, unlike the First and Second Councils of Seville were not preserved in the Hispana, a collection of canons and decretals likely edited by Isidore himself.<ref>Rachel Stocking, "Martianus, Aventius and Isidore: provincial councils in seventh-century Spain" Early Medieval Europe 6 (1997) 169–188.</ref>

All bishops of Hispania attended the Fourth National Council of Toledo, begun on 5 December 633. The aged Archbishop Isidore presided over its deliberations and originated most enactments of the council.

Through Isidore's influence, this Council of Toledo promulgated a decree, commanding all bishops to establish seminaries in their cathedral cities along the lines of the cathedral school at Seville, which had educated Isidore decades earlier. The decree prescribed the study of Greek, Hebrew, and the liberal arts and encouraged interest in law and medicine.<ref name="ReferenceA">Isidore's own work regarding medicine is examined by Template:Cite journal</ref> The authority of the Council made this education policy obligatory upon all bishops of the Kingdom of the Visigoths. The council granted remarkable position and deference to the king of the Visigoths. The independent Church bound itself in allegiance to the acknowledged king; it said nothing of allegiance to the Bishop of Rome.

Isidore of Seville died on 4 April 636 after serving more than 32 years as archbishop of Seville. 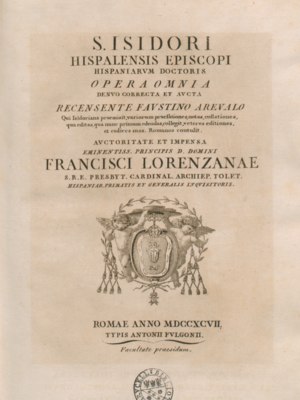 Isidore was the first Christian writer to try to compile a summa of universal knowledge, in his most important work, the Etymologiae (taking its title from the method he uncritically used in the transcription of his era's knowledge). It is also known by classicists as the Origines (the standard abbreviation being Orig). This encyclopedia — the first such Christian epitome—formed a huge compilation of 448 chapters in 20 volumes.<ref>MacFarlane 1980:4; MacFarlane translates Etymologiae viii.</ref>

In it, as Isidore entered his own terse digest of Roman handbooks, miscellanies and compendia, he continued the trend towards abridgements and summaries that had characterised Roman learning in Late Antiquity. In the process, many fragments of classical learning are preserved which otherwise would have been hopelessly lost; "in fact, in the majority of his works, including the Origines, he contributes little more than the mortar which connects excerpts from other authors, as if he was aware of his deficiencies and had more confidence in the stilus maiorum than his own" his translator Katherine Nell MacFarlane remarks.<ref>MacFarlane 1980:4; MacFarlane translates Etymologiae viii.</ref>

Some of these fragments were lost in the first place because Isidore's work was so highly regarded—Braulio called it quaecunque fere sciri debentur, "practically everything that it is necessary to know"<ref>Braulio, Elogium of Isidore appended to Isidore's De viris illustribus, heavily indebted itself to Jerome.</ref>—that it superseded the use of many individual works of the classics themselves, which were not recopied and have therefore been lost: "all secular knowledge that was of use to the Christian scholar had been winnowed out and contained in one handy volume; the scholar need search no further".<ref>MacFarlane 1980:4.</ref>

The fame of this work imparted a new impetus to encyclopedic writing, which bore abundant fruit in the subsequent centuries of the Middle Ages. It was the most popular compendium in medieval libraries. It was printed in at least ten editions between 1470 and 1530, showing Isidore's continued popularity in the Renaissance. Until the 12th century brought translations from Arabic sources, Isidore transmitted what western Europeans remembered of the works of Aristotle and other Greeks, although he understood only a limited amount of Greek.<ref name=CatEncy>St. Isidore of Seville</ref> The Etymologiae was much copied, particularly into medieval bestiaries.<ref>Template:Cite book</ref><ref>Template:Cite book</ref><ref>Template:Cite book</ref>

On the Catholic faith against the Jews 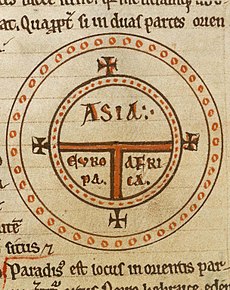 The medieval T-O map represents the inhabited world as described by Isidore in his Etymologiae.

Isidore's De fide catholica contra Iudaeos furthers Augustine of Hippo's ideas on the Jewish presence in Christian society. Like Augustine, Isidore accepted the necessity of the Jewish presence because of their expected role in the anticipated Second Coming of Christ. In De fide catholica contra Iudaeos, Isidore exceeds the anti-rabbinic polemics of earlier theologians by criticizing Jewish practice as deliberately disingenuous.<ref>Template:Cite book</ref>

He contributed two decisions to the Fourth Council of Toledo: Canon 60 calling for the forced removal of children from parents practicing Crypto-Judaism and their education by Christians, and Canon 65 forbidding Jews and Christians of Jewish origin from holding public office.<ref>Template:Cite journal</ref>

Isidore's authored more than a dozen major works on various topics including mathematics, holy scripture, and monastic life,<ref name="Lowney2012">Template:Cite book</ref> all in Latin:

The Eighth Council of Toledo (653) recorded its admiration of his character in these glowing terms: "The extraordinary doctor, the latest ornament of the Catholic Church, the most learned man of the latter ages, always to be named with reverence, Isidore". This tribute was endorsed by the Fifteenth Council of Toledo, held in 688, and later in 1598 by Pope Clement VIII.Template:Fact Isidore was declared a Doctor of the Church in 1722 by Pope Innocent XIII.

Isidore was interred in Seville. His tomb represented an important place of veneration for the Mozarabs during the centuries after the Arab conquest of Visigothic Hispania. In the middle of the 11th century, with the division of Al Andalus into taifas and the strengthening of the Christian holdings in the Iberian peninsula, Ferdinand I of León and Castile found himself in a position to extract tribute from the fractured Arab states. In addition to money, Abbad II al-Mu'tadid, the Abbadid ruler of Seville (1042–1069), agreed to turn over St. Isidore's remains to Ferdinand I.<ref>Father Alban Butler. "Saint Isidore, Bishop of Seville". Lives of the Fathers, Martyrs, and Principal Saints, 1866. Saints.SQPN.com. 2 April 2013. Web. 9 August 2014. Saints SQPN</ref> A Catholic poet described al-Mutatid placing a brocaded cover over Isidore's sarcophagus, and remarked, "Now you are leaving here, revered Isidore. You know well how much your fame was mine!" Ferdinand had Isidore's remains reinterred in the then-recently constructed Basilica of San Isidoro in León.Template:Citation needed Today, many of his bones are buried in the cathedral of Murcia, Spain.

In Dante's Paradiso (X.130), Isidore is mentioned among theologians and Doctors of the Church alongside the Scot Richard of St. Victor and the Englishman Bede the Venerable.

The University of Dayton has named their implementation of the Sakai Project in honour of Saint Isidore.<ref>Isidore.udayton.edu</ref>

His likeness, along with that of Leander of Sevile and Ferdinand III of Castile, is depicted on the crest badge of Sevilla FC.

The Order of St. Isidore of Seville is a chivalric order formed on January 1, 2000. An international organisation, the order aims to honour Saint Isidore as patron saint of the Internet, alongside promoting Christian chivalry online. Members, who may be men or women, receive a modern-day knighthood.<ref>The Order of St. Isidore of Seville. Accessed 28 June 2014.</ref>

St. Isidore Island in Antarctica is named after the saint.