The first edition from 1927 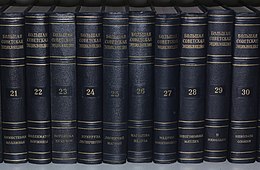 The second edition from 1950 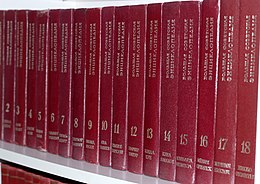 The third edition from 1977

The Great Soviet Encyclopedia (GSE; Template:Lang-ru, БСЭ, Bolshaya sovetskaya entsiklopediya) is one of the largest Russian-language encyclopedias,<ref>The 3rd edition contains more than 95,000 articles, and nearly 35,000 illustrations and maps. Compare with over 120,000 articles in the Russian Brockhaus and Efron Encyclopedic Dictionary (1890–1907) and with 100,000 in the 15th edition of Britannica</ref> published by the Soviet Union from 1926 to 1990. After 2002, the encyclopedia's data was partially included into the later Bolshaya Rossiyskaya entsiklopediya (or Great Russian Encyclopedia) in an updated and revised form. The GSE claimed to be "the first Marxist-Leninist general-purpose encyclopedia".<ref>[1]</ref>

The idea of the Great Soviet Encyclopedia emerged in 1923 on the initiative of Otto Schmidt, a member of the Russian Academy of Sciences. In early 1924 Schmidt worked with a group which included Mikhail Pokrovsky, (rector of the Institute of Red Professors), Nikolai Meshcheryakov (Head of Gosizdat, the State Publishing House), Valery Bryusov (poet), Veniamin Kagan (mathematician) and Konstantin Kuzminsky to draw up a proposal which was agreed by the in April 1924. Also involved was Anatoly Lunacharsky, Commissar of Enlightenment (Narkompros), who had previously been involved with a proposal by Alexander Bogdanov and Maxim Gorky to produce a Workers' Encyclopedia.

There were three editions. The first edition of 65 volumes (65,000 entries, plus a supplementary volume about the Soviet Union) was published during 1926–1947, the chief editor being Otto Schmidt (until 1941). The second edition of 50 volumes (100,000 entries, plus a supplementary volume) was published in 1950–1958; chief editors: Sergei Vavilov (until 1951) and Boris Vvedensky (until 1969); two index volumes to this edition were published in 1960. The third edition of 1969–1978 contains 30 volumes (100,000 entries, plus an index volume issued in 1981). Volume 24 is in two books, one being a full-sized book about the USSR, all with about 21 million words,<ref>Kister, p. 365</ref> and the chief editor being Alexander Prokhorov (since 1969). In the third edition, much attention was paid to the philosophical problems of natural sciences, physical and chemical sciences, and mathematical methods in various branches of knowledge.<ref>Script error: No such module "citation/CS1".</ref>

From 1957 to 1990, the Yearbook of the Great Soviet Encyclopedia was released annually with up-to-date articles about the Soviet Union and all countries of the world.

The first online edition, an exact replica of text and graphics of the third (so-called Red) edition, was published by Rubricon.com in 2000.

Editors and contributors to the GSE included a number of leading Soviet scientists and politicians: Template:Div col

Role and purpose in Soviet society

The foreword to the first volume of the GSE (2nd ed.) proclaims "The Soviet Union has become the center of the civilized world."<ref name=Benton /> The GSE, along with all other books and other media and communications with the public, was directed toward the "furtherance of the aims of the party and the state."<ref name=Benton>From extensive discussions with the editors of the second edition of the GSE, editor-in-chief Vvendensky. Benton, W. This Is The Challenge. Associated College Presses. 1959</ref> The 1949 decree issued for the production of the second edition of the GSE directed:

The second edition of the Great Soviet Encyclopedia should elucidate widely the world-historical victories of socialism in our country, which have been attained in the U.S.S.R. in the provinces of economics, science, culture, and art. ... With exhaustive completeness it must show the superiority of socialist culture over the culture of the capitalist world. Operating on Marxist-Leninist theory, the encyclopedia should give a party criticism of contemporary bourgeois tendencies in various provinces of science and technics.<ref name=Benton/>

Script error: No such module "Check for unknown parameters".

The foreword to the GSE (3rd ed.) expanded on that mission, paying particular attention to developments in science and technology: nuclear engineering, space technology, atomic physics, polymer chemistry, and radio electronics; also detailing the history and activities of the Russian revolutionary movement, the development of the labor movement worldwide and summarizing Marxist scholarship on political economy, sociology, and political science.<ref>Script error: No such module "citation/CS1".</ref> In support of that mission, the GSE (2nd ed.) described as the role of education:

To develop in children's minds the Communist morality, ideology, and Soviet patriotism; to inspire unshakable love toward the Soviet fatherland, the Communist party, and its leaders; to propagate Bolshevik vigilance; to put an emphasis on internationalist education; to strengthen Bolshevik willpower and character, as well as courage, capacity for resisting adversity and conquering obstacles; to develop self-discipline; and to encourage physical and aesthetic culture.<ref name=Benton/>

Script error: No such module "Check for unknown parameters".

The third edition of the GSE subsequently expanded on the role of education:

Education is essential to preparing for life and work. It is the basic means by which people come to know and acquire culture, and it is the foundation of culture's development...The Soviet education rests on the principles of the unity of education and communist upbringing; cooperation among the school, the family, and the society in bringing up young people; and the linkage of education and training to life and the practical experience of building communism. The underlying principles of the Soviet system of public education include a scientific approach to and continual improvement of education on the basis of the latest achievements in science, technology and culture; a humanistic and highly moral orientation in education and upbringing; and co-education of both sexes, secular education which excludes the influence of religion.<ref>Great Soviet Encyclopedia, "Education" </ref>

Based on his extensive talks with the editors of the GSE, to whom he was granted unprecedented access, William Benton, publisher of the Encyclopædia Britannica, wrote the following in observation of the GSETemplate:'s chief editor B. A. Vvedensky stating their compliance with the 1949 decree of the Council of Ministers:

It is just this simple for the Soviet board of editors. They are working under a government directive that orders them to orient their encyclopedia as sharply as a political tract. The encyclopedia was thus planned to provide the intellectual underpinning for the Soviet world offensive in the duel for men's minds. The Soviet government ordered it as a fighting propaganda weapon. And the government attaches such importance to its political role that its board of editors is chosen by and is responsible only to the high Council of Ministers itself.<ref name=Benton/>

The third edition was translated and published into English in 31 volumes between 1974 and 1983 by Macmillan Publishers. Each volume was translated separately, requiring use of the index found at the front of each volume to locate specific items; knowledge of Russian can be helpful to find the right volume the first time. Not all entries were translated into English; these are indicated in the index. Articles from the English edition are made available online by TheFreeDictionary.com.<ref>TheFreeDictionary.com, Our Main Sources, Retrieved 17 August 2013.</ref>

The third edition was translated into Greek and published in 34 volumes between 1977 and 1983. All articles that were related to Greece or Greek history, culture and society were expanded and hundreds of new ones were written especially for the Greek edition. Thus the encyclopedia contains, for example, both the Russian entry on Greece as well as a much larger one prepared by Greek contributors.

Finally, a supplementary volume covering the 1980s was published in 1989. It contains translated and original Greek articles which, sometimes, do not exist in the 34-volume set.

The Soviet Encyclopedia is a systematic summary of knowledge in social and economic studies and in the applied sciences.Template:Citation needed It became a universal reference work for the Soviet intelligentsia.<ref name="ReferenceA">Publishers' Foreword, Great Soviet Encyclopedia: A Translation of the Third Edition. Volume 1. Macmillan, Inc.</ref> According to the publisher's foreword in the English-language translation of the encyclopedia, the encyclopedia is important for knowledge and understanding of USSR. A major value of the Encyclopedia is its comprehensive information about the Soviet Union and its peoples. Every aspect of Soviet life is systematically presented, including history, economics, science, art, and culture.Template:Citation needed The ethnic diversity of USSR's peoples and its languages and cultures are extensively covered. There are biographies of prominent cultural and scientific figures who are not as well known outside of Russia. There are detailed surveys of USSR's provinces and towns, as well as their geology, geography, flora and fauna.<ref name="ReferenceA"/>

Following the arrest and punishment of Lavrentiy Beria, the head of the NKVD, in 1953 the encyclopedia—ostensibly in response to overwhelming public demand—mailed subscribers to the second edition a letter from the editor<ref>Sophie Lambroschini, “Russia: Putin-Decreed ‘Great Russian’ Encyclopedia Debuts At Moscow Book Fair Template:Webarchive,” Radio Free Europe/Radio Liberty</ref> instructing them to cut out and destroy the three-page article on Beria and paste in its place enclosed replacement pages expanding the adjacent articles on F. W. Bergholz (an 18th-century courtier), the Bering Sea, and Bishop Berkeley.<ref>O. Lawrence Burnette Jr. and William Converse Haygood (Eds.), A Soviet View of the American past: An Annotated Translation of the Section on American History in the Great Soviet Encyclopedia (Chicago: Scott, Foresman, 1964), p. 7. Template:Webarchive”</ref><ref>Template:Cite news</ref> By April 1954, the Library of the University of California, Berkeley had received this “replacement.”<ref>“He who destroys a good Book, kills reason it self:an exhibition of books which have survived Fire, the Sword and the Censors Template:Webarchive” University of Kansas Library 1955</ref> This was not the only case of political influence. According to one author, encyclopedia subscribers received missives to replace articles in the fashion of the Beria article frequently.<ref>John T. Jost, Aaron C., Social and Psychological Bases of Ideology and System Justification, Oxford University Press US, 2009, Template:ISBN, Google Print, p.465</ref> Other articles, especially biographical articles on political leaders, changed significantly to reflect the current party line. An article affected in such a fashion was the one on Nikolai Bukharin, whose descriptions went through several evolutions.<ref>Ludwik Kowalski, "Discriptions of Bucharin in Great Soviet Encyclopedia" Template:Webarchive</ref>

Script error: No such module "main". Publication of the Great Soviet Encyclopedia was suspended in 1990 and halted in 1991, but in 2002 it was reinstituted by decree of Vladimir Putin. In 2003 and 2004 a team of editors overhauled the old encyclopedia by updating facts, removing most examples of overt political bias, and changing its name to the Great Russian Encyclopedia. Many outdated articles are being entirely rewritten. In 2004 the first volume of the newly overhauled Great Russian Encyclopedia was published. The complete edition of 35 volumes was released by 2017.<ref>Script error: No such module "citation/CS1".</ref>

Publication of the Great Russian Encyclopedia is overseen by the Russian Academy of Sciences, and funded by the Government of the Russian Federation. The encyclopedia is now found in libraries and schools throughout the CIS.<ref>Script error: No such module "citation/CS1".</ref> Additionally, the 1980s editions remain in widespread use, particularly as references in scientific and mathematical research.