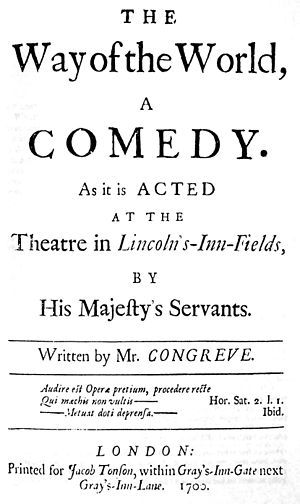 Facsimile of the original title page for William Congreve's The Way of the World published in 1700, on which the epigraph from Horace's Satires can be seen in the bottom quarter.

In literature, an epigraph is a phrase, quotation, or poem that is set at the beginning of a document, monograph or section thereof.<ref>{{#invoke:citation/CS1|citation |CitationClass=web }}</ref> The epigraph may serve as a preface to the work; as a summary; as a counter-example; or as a link from the work to a wider literary canon,<ref>{{#invoke:citation/CS1|citation |CitationClass=web }}</ref> with the purpose of either inviting comparison or enlisting a conventional context.<ref>Template:Cite book</ref>

A book may have an overall epigraphy that is part of the front matter, and/or one for each chapter as well.

Epigraph, consisting of an excerpt from the book itself, William Morris's The House of the Wolfings

Some writers use as epigraphs fictional quotations that purport to be related to the fiction of the work itself. Examples include: