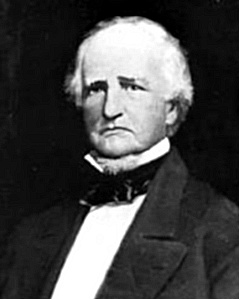 Howard was born at Belvidere in Baltimore County, Maryland, the son of John Eager Howard and Margaret ("Peggy") Chew, daughter of Benjamin Chew. He received an A.B. from Princeton University in 1809.[2] In 1812 he attended and graduated from Litchfield Law School in Connecticut.[3] During 1814, the last year of the War of 1812 he served as a Captain in the First Mechanical Volunteers at the Battle of North Point. He remained in the service and later he reached the rank of brigadier general in the Maryland militia.[2]

Among his siblings were George Howard, Governor of Maryland; Dr. William Howard, a civil engineer and architect; and Charles who with his son Francis Key Howard, were imprisoned in Fort McHenry at the start of the American Civil War. In 1818 he married Jane Gilmor who would write a charity cookbook and after the Civil War lead a successful fundraising fair. They had twelve children.[4]

A Democrat, he served on the city council of Baltimore in 1820 and both houses of the Maryland legislature. He was elected to the Twenty-first and Twenty-second United States Congress, serving from March 4, 1829 to March 3, 1833. In 1835, President Andrew Jackson named Richard Rush and Howard to arbitrate the Ohio-Michigan boundary dispute.[1]

He returned to Congress in the Twenty-fourth Congress and was re-elected to the Twenty-fifth, serving from March 4, 1835, to March 3, 1839. During this service, he chaired the House Foreign Relations Committee for four years. He was the Reporter for the U.S. Supreme Court in 1843-1861.[1]

In 1861, he was one of the emissaries sent by President James Buchanan to try to secure a peace with the Confederacy. That year he unsuccessfully ran for Governor of Maryland. He died in Baltimore at his home on March 6, 1872 and is buried in Greenmount Cemetery.[1]