The 1963 World Series matched the two-time defending champion New York Yankees against the Los Angeles Dodgers, with the Dodgers sweeping the Series in four games to capture their second title in five years, and their third in franchise history. Starting pitchers Sandy Koufax, Don Drysdale, and Johnny Podres, and ace reliever Ron Perranoski combined to give up only four runs in four games. The dominance of the Dodgers pitchers was so complete that at no point in any of the four games did the Yankees have the lead. New York was held to a .171 team batting average, the lowest ever for the Yankees in the post-season.

This was the first time that the Yankees were swept in a World Series in four straight (the 1922 World Series had one tie).

This series was also the first meeting between teams from New York City and Los Angeles for a major professional sports championship.[1][2] Seven more such meetings have followed with three more times each in the World Series and the NBA Finals, and the 2014 Stanley Cup Final.[2]

The Dodgers' road to the World Series was much more challenging. After blowing a four-game lead with seven to play in 1962, the Dodgers again built a lead in 1963. On August 21, the Dodgers beat the Cardinals 2–1 in 16 innings to take a Template:Frac game lead. When they went to St. Louis for a three-game series on September 16, their lead was one game over the Cardinals, who had won 19 of 20 games. Sports fans around the country were saying how the Dodgers were going to blow it again. But the Dodgers swept the three games from the Cardinals to move four games ahead with nine to play; a 4–1 win over the Mets clinched the pennant in the season's 158th game. 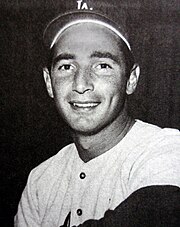 Sandy Koufax started it off with a record 15-strikeout performance in Game 1 to outduel the Yankees' ace left-hander Whitey Ford. The 15 strikeouts bested fellow Dodgers pitcher Carl Erskine's mark in 1953 by one, and would be surpassed by Bob Gibson in 1968. Koufax also tied a World Series record when he fanned the first five Yankees he faced.

Clete Boyer was the only Yankees regular not to strike out. Mickey Mantle, Tom Tresh and Tony Kubek each struck out twice, and Bobby Richardson struck out three times—his only three-strikeout game in 1448 regular season or World Series games. Koufax also struck out three pinch-hitters, including Harry Bright to end the game.

Ford set the Dodgers down in order in the first inning, but got into trouble in the second inning. With one out, right fielder Frank Howard doubled into left center field. A single by first baseman Bill Skowron plated Howard to give the Dodgers a 1–0 lead. Second baseman Dick Tracewski's single preceded a three-run home run by catcher John Roseboro to give the Dodgers a 4–0 lead.

The Dodgers upped the lead to 5-0 when Skowron singled home Willie Davis with two outs in the third inning against Ford, who went just five innings.

The Yankees scored twice in the eighth inning when Tony Kubek singled with one out and Tom Tresh homered with two outs to cut the lead to 5–2. [3]

Template:Linescore Willie Davis doubled in two runs in the first inning, former Yankee Bill Skowron homered in the fourth, and Tommy Davis had two triples, including an RBI triple in the eighth to lead the Dodger offense. Yankee starter Al Downing, who would take the loss, went only five innings and charged with three runs. Ralph Terry, in relief, allowed Davis's RBI triple. Dodger manager Walt Alston went with #3 starter Johnny Podres over #2 starter Don Drysdale because he was left-handed and Yankee Stadium was favorable to left-handed pitchers. Podres delivered a six-hitter through Template:Frac innings; ace reliever Ron Perranoski, also a left-hander, got the last two outs and the save, and the Dodgers headed home with 2–0 Series lead.

Don Drysdale pitched a masterful three-hitter at Dodger Stadium in his complete-game win. Manager Walter Alston called Drysdale's performance "one of the greatest pitched games I ever saw." Jim Bouton, making his first World Series start, dueled Drysdale throughout, permitting only four hits in seven innings for a losing cause. The lone run of the game came in the bottom of the first on a Jim Gilliam walk, a wild pitch and a single by Tommy Davis. Gilliam almost scored again in the eighth off Hal Reniff, but was caught in an attempt to steal third. The final out came on Joe Pepitone's drive that backed Dodger right fielder Ron Fairly up against the bullpen gate to make the catch of a ball that would have been a home run in Yankee Stadium. Tony Kubek had two of the Yankees' three hits, but none of the hits were extra-base hits. 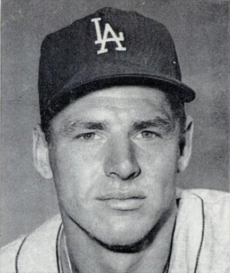 Aces were on the mound again in a game 1 rematch between Whitey Ford and Sandy Koufax. This time, it was a pitcher's duel. The Dodgers scored first in the bottom of the fifth on a monumental Frank Howard home run into the upper deck at Dodger Stadium. The Yankees tied it on a Mickey Mantle home run in the top of the seventh. But in the bottom of the inning, Gilliam hit a high hopper to Yankee third baseman Clete Boyer; Boyer leaped to make the grab, and fired an accurate throw to first base. But first baseman Joe Pepitone lost Boyer's peg in the white-shirted crowd background; the ball struck Pepitone in the arm and rolled down the right field line, allowing Gilliam to scamper all the way to third base. He then scored a moment later on Willie Davis' sacrifice fly. Sandy Koufax went on to hold the Yankees for the final two innings for a 2–1 victory and the Dodgers' third world championship. To date, this is the only time the Dodgers have won the deciding game of a World Series at home.

The World Series Most Valuable Player Award went to Sandy Koufax, who started two of the four games and had two complete game victories. When the award was given to Koufax at a luncheon in New York City, he was presented with a new car—while the luncheon was taking place, a New York City police officer put a parking violation ticket on the car's windshield.[4] 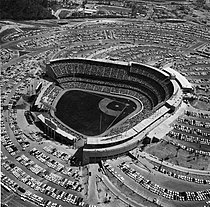 The Yankees' four runs in the series was, at the time, the second-lowest total in a World Series, as the Philadelphia Athletics had scored only three runs in Template:Wsy. The Los Angeles Dodgers would set a new low in Template:Wsy, two runs.